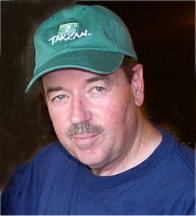 DANTON BURROUGHS (1944 - 2008) TRIBUTE
CONTENTS
www.erbzine.com/dantonburroughs
Goodbye dear friend ~ So many good times ~ So many memories
To live in hearts we leave behind is not to die.

Our 2011 debut issue features a project that has been years in the making.
Previously in our John Tyman's Cultures in Context Series, Dr. Tyman shared his experiences
while living with native people: the Inuit of the Canadian Arctic, and the Sawos and Torembi of New Guinea.
In the latest of this series, mirrored from our EduTech University Research Project site,
the spotlight is on Africa: The Land and People

Read the latest edition of the ERB, Inc. Monthly Webzine.
The best of the features that have appeared on the ERB, Inc. Websites over the last month.
www.tarzan.com/tarzine

Editor and Webmaster: BILL HILLMAN
BILL AND SUE-ON HILLMAN ECLECTIC STUDIO
ERB Text, ERB Images and Tarzan® are ©Edgar Rice Burroughs, Inc.- All Rights Reserved.
Mirrored ERBzine Material is copyrighted by the respective contributors and/or Bill Hillman
No part of this Web site may be reproduced without permission.